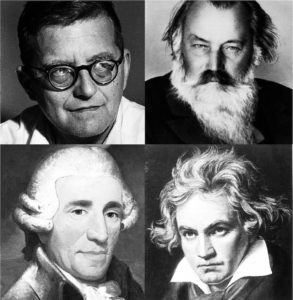 The Piano Trio and The Art Song – two chamber music formats that have been explored by many significant composers across the ages. But the number of works that actually combine the two is remarkably small. Pride of place is held by around 600 arrangements of folk-songs from Ireland, Wales and Scotland (along with other non-Anglophone countries) by Haydn and Beethoven, along with Shostakovich’s Romanzen-Suite (op. 127).
They inspire a project for piano trio and voice: the program includes a selection of folk song arrangements by Haydn and Beethoven, arranged song cycles by Brahms and others, and new commissioned compositions.

The Song of the Earth –
Dialogue of the diverse

Gustav Mahler’s Song of the Earth, a work about Life and Death, Youth and Old Age, Day and Night, combines western composition with an unfamiliar, far-eastern soundworld. We have adopted the Mahlerian concept Dialogue of the Diverse as the central focus of the planned concert project. The programming concept is certainly unique: it was inspired by the twin global perspective which Mahler wove throughout his Song of the Earth, even at structural level. As well as the German-Chinese ensemble which will play Mahler’s richly scored orchestral work in the Second Half, the First Half of the concert will feature several world premieres performed by solo instrumentalists – each of which will be written specifically for the project, making reference to Mahler’s work, both in content and compositional process. We have been especially fortunate in securing top-class soloists (Berlin Philharmonics) and composers from Japan, Hungary, Israel, Germany, France and the USA. They are undertaking the challenge of interpreting Mahler’s messages anew, through the means of solo music. Unfortunately, the concerts in China had to be postponed due to the pandemic. The whole project is conceived as an initial concert series which leaves other possibilities wide open; a second season is being planned.

SONGS OF THE EARTH
FOR SOLO INSTRUMENTS

All world premieres are commissioned by the Junge Kammerphilharmonie Berlin as part of the concert series Das Lied von der Erde - Dialogue of Diverses based on an idea by Sarah van der Kemp.

"For me, The Song Of The Earth is one of the most important works of western music. It takes on the text of a Chinese poet that was translated into German, and through this, Mahler’s world of eastern music is expressed. In the final movement, ‘Abschied’, the people crossing the borderline to and fro between this world and the other, are deeply expressed by the music. In ancient Chinese philosophy, the borderlines between this world and the other, as well as between dream and reality, are ambiguous and chaotic. From this eastern world view, I have considered music to be the instrument that connects this world and the other, and have carried out my compositional activities on the understanding that musicians are shamans that connect these two worlds. In this solo piece, a characteristic motif of the oboe in Abschied is often used. My music is a sonic calligraphy of time and space, and the english horn was the perfect instrument to express my calligraphic line and frequent use of portamentos and appoggiaturas. The title derives from the text of Abschied."

Adventures of the Dominant Seventh Chord

"There is scarcely a chord that typifies western classical music more than the dominant seventh. It is typical, first and foremost, because it occurs so frequently; and this is because it has a special function: to prepare the ground for a cadence. On hearing this chord, you are safe in the knowledge that the musical phrase is to be completed. Or not, as the case may be! Perhaps there will be a so-called Interrupted Cadence, misleading the listener with a knowing smile.
But in Adventures of the Dominant Seventh Chord my intention was to mislead no-one; rather perhaps to catch out the trusty old dominant seventh whenever we use it to undertake a surprising leap, crossing over from Western to Eastern European culture. The dominant seventh chord prepares the way for a calm and orderly point of closure; but what actually follows in this piece is something quite different: dance music in the style cultivated by the folk musicians of Transylvania.
My piece sets up a confrontation between two musical cultures, but I do not think that they are in conflict with one another. It is simply that they are separated by a virtual, and in this case fully audible, border; they are just different. Western European music is composed music, written down for subsequent interpretation by the performer. By contrast, most Eastern European folk musicians are unable to read music; instead, they learn by ear, soon making the music "their own."
In Transylvanian dance music, it is the violin that takes the leading role, playing the melody to which the other instruments supply rhythmic and harmonic accompaniment. In Adventures of the Dominant Seventh Chord, fast and slow dances alternate, with the dominant seventh chord frequently appearing between them - each time in a different guise. If the chord were to catch sight of himself in the mirror, he would barely recognise himself, so drastic are the changes wrought through expansion or contraction of his intervals - a real adventure of endless surprises."

"It is hard for me to contemplate Das Lied von der Erde today without some reference to the obvious: Mahler initially wanted to call his work Das Lied vom Jammer der Erde, and today’s ‘Jammer der Erde’ has become a primary fact of contemporary life. As a teenager Mahler’s music spoke to me with some special urgency, and it’s shocking to think how much of our destruction has been wrought since then – quickly checking a NOAA CO2 graph, I see that almost two thirds of civilization’s whole increase in CO2 since industrialization’s start has come. Now I understand that urgency, which I still feel, differently. Today I see Mahler’s largest works as personal expressions of Haeckelian Monism, which I see as holding important seeds for the future. Haeckel, who coined the term ecology, also helped to initiate the idea of endosymbiosis, being perhaps the first to notice that chloroplasts (Haeckel also named and was the discoverer of the plastids) seemed like cyanobacteria trapped inside plant cells. Understanding our planet’s self-regulatory mechanisms will be key, and the symbiogenetic basis of evolutionary novelty will likely be shown to be at the core of such mechanisms. In other words, both as metaphor and as guide to action, the Haeckelian thinking Mahler confronted is still entirely contemporary.

Vom Leid der Erde takes three common species I live around (on a horse farm), and introduces their voices into classical music in a sequential order, equating the seasonal passage there from winter to spring. Almost like the French horn’s quality of holding together the sections of an orchestra, the Aeolian harp plays a key role in binding together the components, and in mediating the inherent need for technology to dialogue with Nature in this way. The Aeolian harp is the sole instrument that plays only harmonics, and the complexity of its effects stems from the Karman vortex street effect of the wind. I use just three tunings: 1. what I like to call Mahler’s ‘Nature chord’, eerie, as in the first movement of his 3rd , the minor-major seventh chord, meant to depict the beginnings of life (Mahler wrote to Nathalie Bauer-Lechner, while composing it, that Nature was fundamentally ‘eerie’), 2. the dissonant 9-note chord that climaxes the first movement of the incomplete 10th, and 3. a purely pentatonic collection. Great horned owls were nesting on the farm this past winter, but unfortunately I hadn’t started my piece and didn’t record them, (and so had to use external sources) but the red-wing blackbirds and American toads I recorded as they arrived, both on the farm and the surrounding fields."

“A voice with charisma and warmth” Sarah van der Kemp shaped the concert as the vocal soloisther singing was inspiring. She holds this song skilfully to the ground, preserving it from kitsch and a height that might sound too jubilant.“

Transcriptions and paraphrases for piano occupy a large space in Liszt’s oeuvre. It is not just a matter of transferring the respective work to a piano setting; Liszt interprets the large compositions with the sound structures of the piano in his own way.
In this project, the way goes the other way around, from piano setting to orchestrated arrangement. (Arrangement: Aurélien Bello)

In memory of the pianist László Simon, this collection was created with recordings from the Swedish Radio. 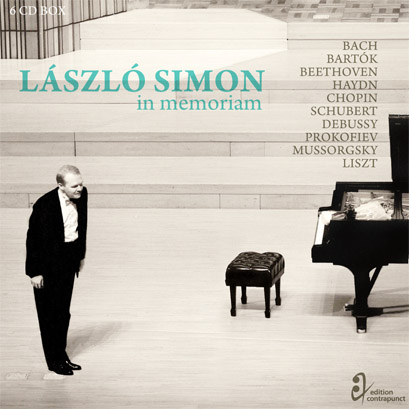